Having Your Story Heard: How to Make Your Book an Audiobook

by Holly Bryant-Simpson (@hollishter), public relations director for ListenUp Audiobooks (@Listen2Books)
Not a week goes by without another article that asks the question – does listening to an audiobook count as reading? Whether you answer yes or no, you can’t deny that audiobooks are a major player in the publishing industry.

Last year, sales of downloadable audiobooks shot up by 38.9%. The market has been consistently growing for years and it doesn’t seem to be slowing down anytime soon. Making your book available in the audiobook format is a great avenue for sales and exposes your story to new audiences.

There are three main ways that audiobooks get made:

As recently as the late 1990s, the average audiobook cost about $25,000 to produce. Because of this cost, most books were not available as audiobooks. The decision to produce an audiobook, and all the decisions about how to do so, were made by the publisher. The publisher would decide if and when to produce an audiobook, who would narrate, and how it would be distributed. In this situation, authors don’t retain the audio rights to the titles and have very little control over the finished product. This option is, of course, unavailable to self-published authors.

As technology has improved, audiobook production has become more affordable. In 2011, Audible capitalized on those improvements and changed the audiobook rules when it launched its Audiobook Creation Exchange (ACX). ACX connects rights holders with independent audiobook narrators who produce audiobooks, typically from a studio they’ve set up in their home. Producers are responsible for narration, engineering, editing, and quality control. When projects are listed, interested narrators will submit auditions and the author has the final say.

ACX allows authors to distribute books through Audible and iTunes in both exclusive and non-exclusive agreements.

Authors have the option of paying for their audiobooks in the traditional way – paying the producers a fee per finished hour (PFH) or by splitting the royalties 50/50 with the producer.

Many authors find ACX’s Royalty Share option appealing for the lack of upfront cost. But if you have spent months or years writing your book, you may not want the narrator to make as much as you do off of your story. Seasoned narrators are often weary of taking Royalty Share projects, as the full-payment is not guaranteed and, at best, delayed. Narrators are more likely to seek a new project that will pay per finished hour than to put effort in promoting a book they’ve already finished. Many authors find that is worth paying the upfront cost of a PFH project, in terms of the caliber of narrators who audition and in terms of profits made from royalties.

Audiobook production studios offer full-service production, meaning the cost should include casting and hiring a narrator, engineering, editing, quality control, and mastering. Authors keep all their rights and are included in major decision-making, both on the creative side of things and the business side of things. Creatively, authors are included in the casting process, working with the casting director to find the ideal narrator and discussing pronunciation, accents, and voice characteristics with the narrator. Studios are often willing to work with narrators outside of their usual talent pool, should you want someone specific, and some will even hire celebrities.

Once you’ve picked your narrator, recording begins. Authors are sent the first 30 minutes or first chapter to make sure everything is on track before the studio completes the record. Once recording is finished, authors are provided with the completed audio files to sell as they please.

If you choose a production studio that does not also offer distribution, you will need to hire an audiobook distribution service to make your audiobook available in retail and library outlets. Each retailer has a different royalty split, so what you earn will be dependent on that and your chosen distributer’s split. 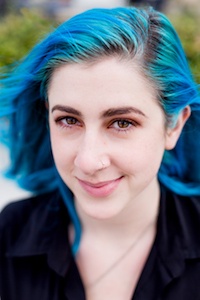 Holly Bryant-Simpson is the public relations director for ListenUp Audiobooks, an audiobook producer, publisher, and distributer in Atlanta, GA. She has been a featured speaker at national and international conferences on writing, publishing, and journalism education, including presenting her masters thesis at the Association for Education in Journalism and Mass Communication Conference in Montreal, Canada. Find out more about Holly at HollyAnneSimpson.com.

Is Your Book Audiobook Worthy?