How to Identify Sticky Sentences in Your Writing

by Kyle A. Massa (@prowritingaid)

"There are some really good reasons that many writers maybe might not want to have a few too many sticky sentences in their personal or professional writing."

Are you ready to abandon this post? With an opening sentence like that, I wouldn't blame you. We call that a "sticky sentence." It’s grammatically correct, but it's clunky and hard to follow. It wobbles around before it gets to the point, and it includes irrelevant information that should be cut. In this post, we’ll explore how you can identify (and repair) sticky sentences in your writing.

What is a Sticky Sentence?

These are the words that carry the majority of the meaning in your sentence. They might be verbs or nouns, adjectives or adverbs, but they contain essential information for your reader.

In the sentence below, the working words are in bold:

Maya sweltered in the blazing sun and wondered if the afternoon would ever end.

Glue words are like the scaffolding holding your sentence together. They don’t have much meaning on their own, but they are essential in connecting and giving meaning to your working words. Here are a few of the classics: 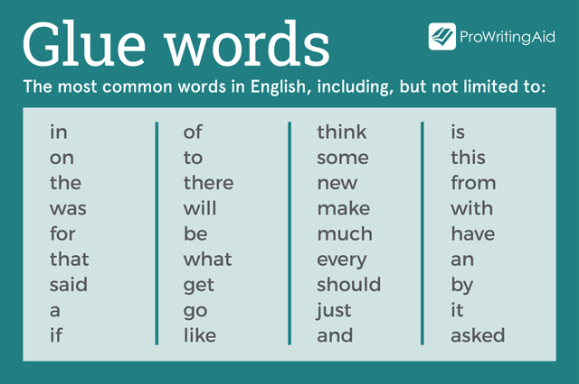 It’s all a percentage game.

A little glue goes a long way. In fact, statistics show that published texts have a low percentage of glue words compared to working words. That's because experienced writers edit their work so it contains as few inessential words as possible.

A good rule of thumb is to aim for less than 40% glue words per sentence. If your sentence contains more than 40%, you should probably rewrite it to increase clarity.

Let’s look at an example:

Sticky: There is a lake out in the middle of the woods where locals go to get away from the tourists who come take over all of the village’s restaurants and shops in the summer.

That's better! The rewrite contains a much smaller percentage of glue words and it provides more specific information than that sticky sentence.

Just remember to use your best judgment. Sometimes a sentence will be sticky and it’s the only way it works. Just think of it as a flag that you should give it a second look to make sure it can’t be rewritten in a simpler way.

Now that we know how to recognise sticky sentences and glue words, let’s explore various ways to de-stick them.

How to Unstick Your Sentences

When faced with a sticky sentence, ask yourself the following questions:

Does this sentence contain nonessential information?

Sticky: As soon as I read King‘s Misery in my class, I decided that I liked it even more than I liked The Shining, which I read last year.

Rewrite: I preferred King’s Misery to The Shining.

Four points about the above sentence:

As such, all that information is nonessential. Cut it.

Does this sentence contain more than one point?

Sticky: As Henry was running to try and catch the train that would take him to his new home in Brighton, he remembered that he had forgotten to say goodbye to Elizabeth and he knew that her feelings would be very hurt.

Rewrite: Henry sprinted to catch the train that would take him to his new life in Boston. Elizabeth flashed in his mind. He had forgotten to say goodbye. She would never forgive him.

In the first example, we tried to squeeze too much information into one sentence. The three key points—he might miss his train, he forgot to say goodbye, and Elizabeth will be hurt—are all less impactful because they are not given enough space. In the rewrite, these points are more evocative for the reader.

Have you put the essential point in the second half?

Sticky: Ever since she had been a small child growing up in rural New Hampshire, she‘d had the unlikely dream of being an astronaut.

Rewrite: She had always dreamed of becoming an astronaut: an uncommon goal in rural New Hampshire.

When you write your sentences back-to-front, it takes more scaffolding to hold it in place. It also means that your reader has to wade through a lot of glue before they reach your main point. In most cases, you can improve readability by putting your essential information first.

Is the main point of your sentence clear and easy to understand?

Sticky: There were some really good reasons why Amy decided that it might be a bad idea to pursue her master’s degree, even though she thought that the advanced degree could potentially have some sort of benefit in the future.

Rewrite: Amy decided not to pursue her master’s degree, even though an advanced degree could benefit her career in the future.

When you have too many glue words in your sentence, it can make your main point hard to identify. By boiling down your work to exactly what you need to say, your sentence will be easier for your reader to understand.

Great advice, isn't it? I wish I could take credit, but those words were written by William Strunk in his essential writing handbook, The Elements of Style. The advice is simple: find words with no purpose and delete them. Consider the following sentence.

Sticky: I came in on the train because I don't really like flying in airplanes all that much.

By omitting needless words, we can reduce the stickiness of this sentence and thereby make it far more readable. How about this?

Rewrite: I hate flying so I took the train instead.

Much better. Many of the glue words we used before, such as "came," "do," "really," and "that," added weight without adding meaning, and were therefore needless. By omitting them, we've created a much clearer sentence.

But Mr. Strunk wouldn't let us stop there. We must apply his principle to non-glue words as well. Take his quote: “Omit needless words”. Strunk could've written, "Don't use needless words." That's technically not a sticky sentence. Yet if he wrote that, he wouldn't be taking his own advice. "Omit" shaved one word and solidified his point.

I’m probably making too big a deal over a one-word savings. But when we learn to do this consistently in our work, it sharpens our prose and boosts our clarity.

Remember William Faulkner’s famous writing advice, “Kill your darlings”? While I don’t recommend murder, being objective and honest with yourself is essential when you self-edit. Consider this paragraph:

There was a view into the valley that she thought was the most amazing view she had ever laid eyes on, and it was, she knew. It was. The leaves of the trees were sparkling emeralds and the sky that was above was blue as the eyes of a newborn child. She was ready for a new day and a new chance for this life of hers. She promised herself she would have it.

Be honest with yourself. If you stretch a description because you think it makes you sound smart, shorten it. If a sentence is flagged and your heart breaks a little because it’s one you love, do your best to look at it objectively and consider other options. You may find an even better way to express the same idea.

If you're struggling to be objective about your work, reach out to an IngramSpark expert for help. You can work with a professional book editor, or use an editing tool like ProWritingAid that's able to spot a sticky sentence and assign a glue index just by dividing the number of glue words by the total number of words in the sentence.

Again, the writer has the final say. Just because a sentence is sticky doesn't necessarily mean it needs cutting. Just keep these statistics in mind when making your final decisions.

Sticky Sentences: Summing It All Up

Writing is all about making sure that your ideas and thoughts are handed over to the reader in the least convoluted way possible.

Sorry. Let me rephrase that.

Writing is hard. Make reading it easier by refining (or cutting) your sticky sentences. Doing so makes your work stronger, clearer, and brief. Now that’s the sign of good writing! 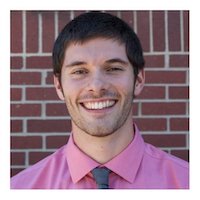 Kyle A. Massa is an independent speculative fiction author and a writer for the ProWritingAid Blog. When he’s not writing, he enjoys reading, running, drumming, and playing with his cats. His debut novel, Gerald Barkley Rocks, is available now.

How to Convert A Print Book to an Ebook

The Benefits of Professional Editing

Different Types of Edits: The Ultimate Guide to Editing a Book