So you just tried advertising for the first time. You signed up for Facebook's ad tools. You made your first ad. You chose an audience, and you uploaded some pictures, and you wrote some great ad copy. Maybe you even tweaked a bunch of settings over time as you figured out what worked and what didn't. Heck, you probably even sold a couple more books than you usually do. So why didn't your ads work quite like you wanted?

I've worked with a lot of authors, and I hear the same things over and over.

"My ads are getting a lot of clicks, but nobody's buying my book."

"I'm not really sure who's seeing my ads."

"I'm not even sure my ad is getting shown to anyone at all!"

There are a lot of unique pitfalls that authors need to consider when running ads for their books. Some of these are common tropes in all advertising, but when it comes to hocking your books online, there are a few specific things you need to know before you begin. With these in mind, you'll come out of the gate with better clickthroughs, more engagements, and, hopefully, some more book sales.

Take a look at your book cover. I'm going to guess the title is written in huge, bold letters all over the front. Your name is probably on there too, right? You probably have an eye-catching image on there as well, but like most book covers, the main selling point is the title. There's only one big problem with that: advertising platforms hate text.

In fact, Facebook's ad platform will automatically detect if you have too much text in your ad image, and automatically flag it. Only images that contain less than 20% text are permitted.

According to Facebook, the reason for this is that text in an ad image results in significantly lower engagement with the ad. It's the old picture is worth a thousand words effect—when a user is quickly scrolling through the infinite mess of their social feed, the most eye-catching visual is the one that elicits an immediate, visceral, reflexive response, rather than the one that requires the most brainpower.

An effective image can make or break your ad campaign, but you should opt to use as little text as possible when creating your campaigns. Here are a couple ways to avoid this issue.

The cover of Steven Levitt and Stephen Dubner's Freakonomics is one of my all-time favorite book covers. Its imagery is so iconic, and so incredibly descriptive without saying a word—the apple masquerading as an orange is the perfect visual representation of the revelatory findings inside the book. 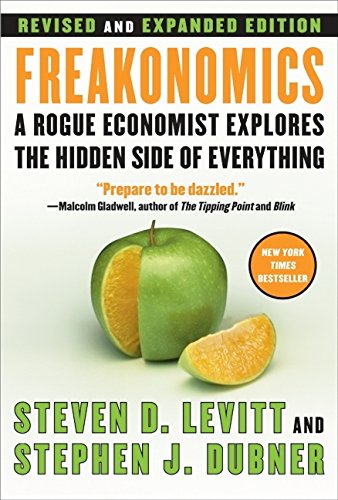 Unfortunately, this book cover would be immediately flagged by Facebook's ad platform for having too much text.

So here's an easy fix: just isolate the image. Or even better yet, find a similar image that can provide some variety in your ad while still creating a strong impression in the viewer's mind of what the book cover looks like. 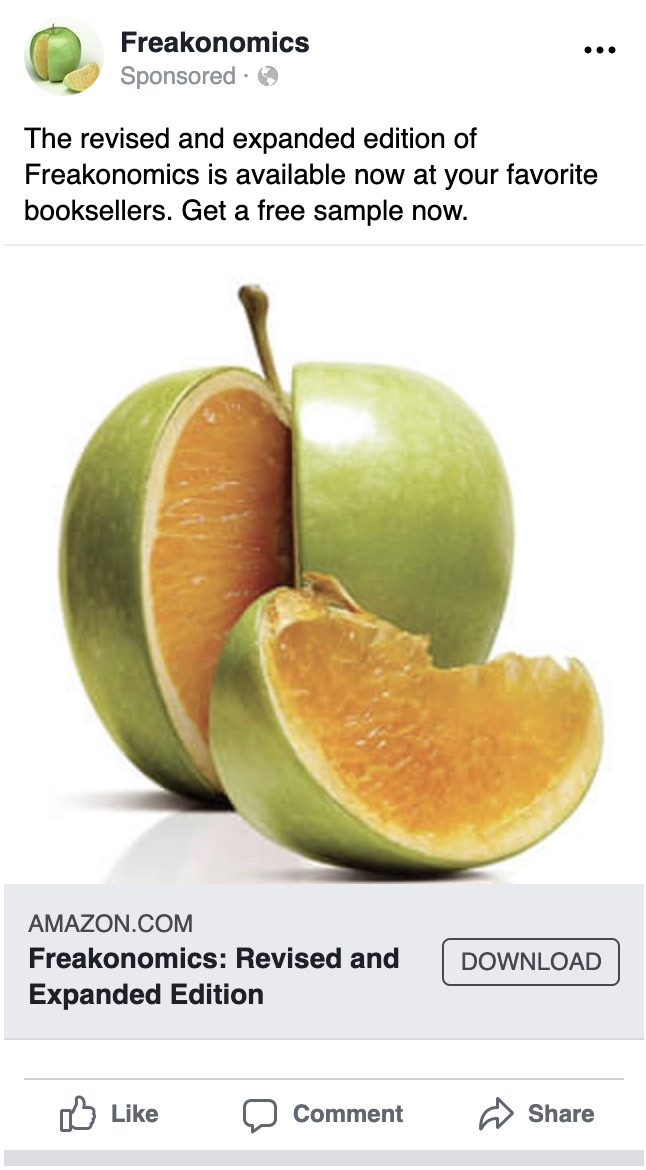 Make an Image Inside an Image

If you can't isolate the imagery in your book cover, you can use a variety of tools to insert your book cover into other images, sometimes referred to as mockups. There's an incredible tool called PlaceIt that can help you create these mockups, or if you've got the skills you can make your own. Here's what 5 minutes in Photoshop can do: 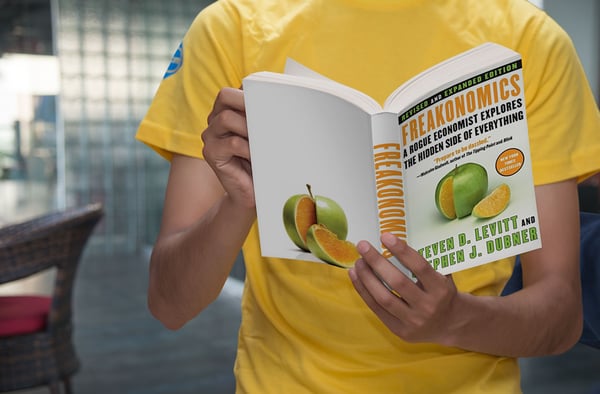 Of course you'll still need to be careful not to cross the 20% text threshold, but with some careful planning and some creativity you can easily bypass this issue, and probably make for a much more compelling ad while you're at it.

One of the simplest mistakes you can make is to forget to tailor your creative for the platform on which it is served. And the clearest and most common places this happens is on Instagram.

One of the byproducts of the extensive filtering available on Instagram is that, for better or for worse, everything on the service, well, looks like Instagram. You know what I'm talking about. The vintagey filters, that slight haze of summertime, like every single photo was taken during golden hour.

So when you make an ad for that platform, you should strongly consider making your ad creative fit that aesthetic as well. Don't just slap an image of your book up and expect it to get lots of engagement. Instead, try filtering your images on the service before you upload them to the ad network. 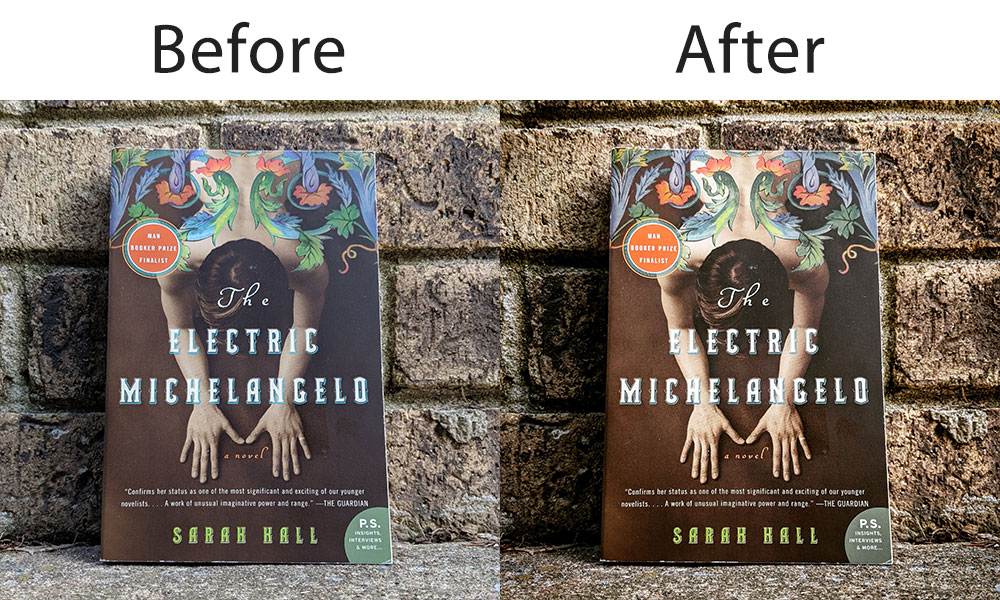 Nobody Wants to Buy Your Book… Yet

You just wrote the Great American Novel. The next Complete Works Of William Shakespeare. The next Curious George. Right?

I don't want to discourage you—I'm sure your book is fantastic—but nobody knows it yet.

It's important to remember that advertising is a game of impressions. It's about putting your brand, your title, your name in front of as many people as many times as possible. There's an old adage in the advertising industry that a person needs to see something seven times before they purchase it. Well, books are no different.

Say you just created your first campaign. You can see that the ad is being shown. (Check those analytics! More on this in a future blog post.) But you've only had one or two sales.

Don't fret. Your campaign isn't over yet.

Instead of going for the hard sell on your first impression, why not try to lure the reader in with a little mystery? Don't ask them to purchase the book right up front. Tease them with a sample chapter. Or go one better: give them your book for free!

Now hold up, you're saying in your head. I worked really hard on this book, and I'm not about to give it away for free.

But if you give your book away for free (or at least a chapter), you gain two crucial things: first, you expose them to the actual work, just like hearing a song on the radio before you buy the LP; second, you capture an email address you can then use to re-market to that reader.

In the marketing business, we call this a sales funnel. Here's a simplified version: 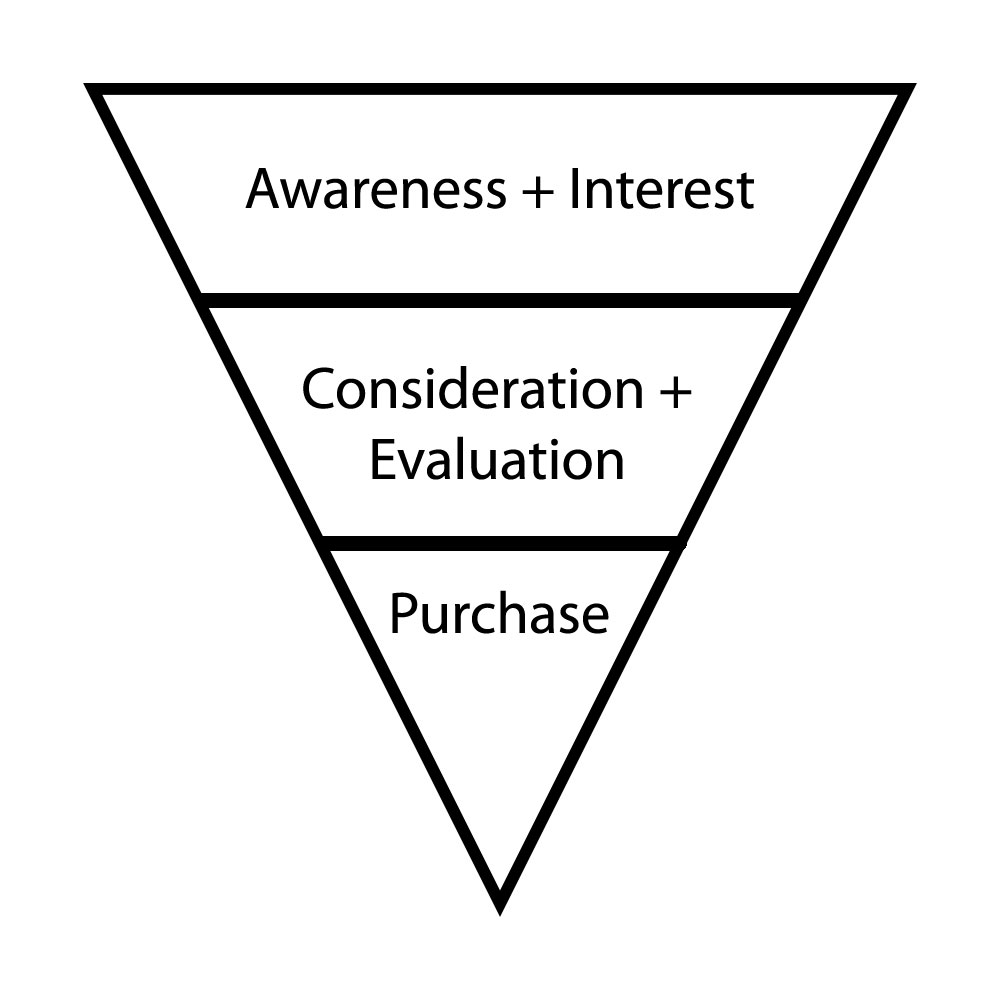 Advertising takes care of the very first part (sometimes referred to as the top of the funnel). In this segment, new readers hear about your book for the first time (awareness), and maybe something catches their attention enough to click through (interest). They read some more on your landing page (consideration), and decide to download the free chapter or free book (evaluation).

It's then, and only then, that you complete the sale (purchase). You can do this via email, via more advertising, via direct contact, or what have you. It's a tried and true method that marketers have been using long before the advent of digital ads, but the ability to reach huge numbers of new readers with advertising, coupled with the simple approach of capturing user data for re-marketing and direct sales is a winning combination turbocharged by new technologies. It's easier than ever to reach new people, and with a little clever setup you'll be picking up new readers in no time. 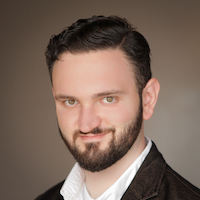 Mike Fabio is COO & Co-founder of Rads and Bandposters, a suite of tools for authors and musicians to promote their books, music, and shows in 90 seconds or less. He is also the VP of Digital Strategy at New West Records, where he oversees social, web, ecommerce, advertising, and streaming promotions. Prior to these roles, he was Partner at Back Porch Group, a consulting company specializing in early-stage music tech startups; Founder at Tiny Jetpack, a boutique digital marketing firm for music and technology; Community Director at Warner Bros. Records, where he oversaw the department managing all aspects of artists’ digital presence; and Community Manager at Google Lunar X PRIZE, overseeing the online community surrounding a $30M prize to land a robot on the surface of the Moon. Reach out to Mike at: mike@wearerads.com

6 Ways to Jump on Holiday Sales

Marketing Your Book Without Social Media