Publishing for a Purpose: Books for Dyslexics

Four in ten people suffer some form of visual stress when they try to read print. They may hold the book at arm’s length, squint and look away from the page frequently; they may develop a headache; suffer nausea; or even have a migraine. And chances are that one of those four people will be dyslexic. Visual stress and dyslexia are ever-present issues for a lot of people, and are not usually addressed in book production, but as an indie author, I realized they can be.

Noticing a Hole in the Book Publishing Market

In the first week of 2013, I had run out of copies of one of my books and was about to order a reprint. A friend came round for a cup of tea, and said she had something to show me. Her job at the time was as a support worker for dyslexic students in higher education. What she showed me was a new typeface that had been developed specifically to be helpful to people with dyslexia.

That conversation with my friend, and that typeface—called “OpenDyslexic”, designed by Abelardo Gonzales—brought home to me the shocking reality of so many people not being able to read my books. Or any books. This couldn’t be right.

I know that if I had not been able to read, my whole life would have been the poorer. Books have been my constant companions, both to read and to write. Nobody should be denied access to books, if anything can be done about it.

I began to trawl the web to find out everything I could about what is helpful to a dyslexic reader.  There was no shortage of information. For dyslexic people, print appears to blur, move about, or look like bar code—that is to say, just a series of vertical lines. Their visual stress, other perceptual complications, and short-term memory issues, may make reading virtually impossible.

My next search was to find some books that incorporated special features for dyslexic people, because I wanted to know what they looked like. I was doomed to disappointment. There were very few books for dyslexics. Aside from some copyright-free reprints of the classics in a dyslexia-friendly font, but with no other modifications, I could find nothing.

My friend and I put our heads together. With her graphics skills, we produced a 20-page story book for small children with a different tint behind each page of print, with a full-page illustration.

I re-edited the book I had intended to reprint and produced another one, incorporated all the adaptations I had learned about—non-white paper, special font, ragged right-hand margins and many more. The two books were one hundred pages long, and at that time, the only cost-effective option was to print on creme paper, as an alternative to white.

We piloted these three books for six months and as a result, Dayglo Books was founded. We now have twenty-four titles.

Black print on white paper is the culprit, so far as visual stress is concerned. A tinted background has the effect of calming down the areas of the brain that give rise to the symptoms of visual stress. Therefore, to enable them to read books, many dyslexic people place a piece of clear tinted acetate over the page, or wear tinted reading glasses. The most effective colour varies from one person to another.

I approached Professor Arnold Wilkins of Essex University who was a pioneer of tinted acetates and the inventor of the equipment optometrists use to prescribe individually tinted glasses. His help has been fundamental in the way our book production has developed. Prof. Wilkins provided the colour values of the acetates, and our graphic designer was able to translate these into the equivalent colour values for the printing inks.

Using IngramSpark’s technology, at the same cost as printing on white paper, our latest book has been produced on a choice of six different tinted backgrounds, which has never been done before. The tinted backgrounds mean that dyslexic readers have all the advantages they would enjoy with an acetate, but also have the special dyslexia-smart modifications to the layout and the particular editorial decisions that are built into all of our books.

Using IngramSpark, Dayglo Books achieved a first in publishing, that we are very proud of—and more importantly, that we hope will make reading for pleasure a real possibility for future generations of dyslexic people. 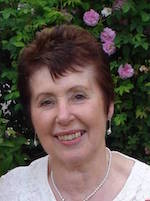 Gloria Morgan is the Managing Director of Dayglo Books Ltd. She grew up in London, likes travelling, and some of the interesting people and places she’s seen have found their way into her books. When she isn’t in front of her computer, she enjoys gardening and going for long walks with her dog. Oh, and singing. She sings a lot; usually when no one is listening.

Writing Fantasy: A Step-by-Step Guide to Creating and Publishing Your Story

How to Use Kickstarter to Publish Your Book: A Crowdfunding Success Story

Why Do Authors Use Pen Names?